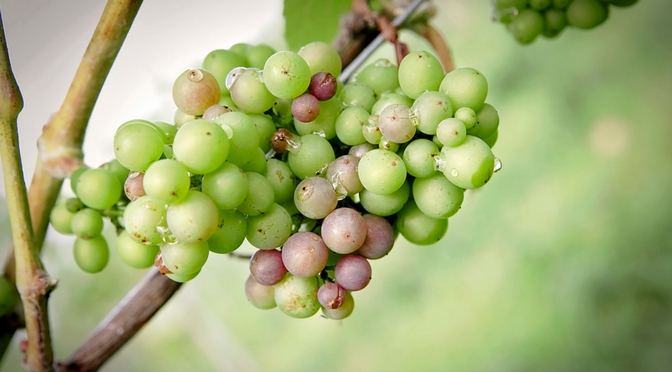 Hand-picked by volunteers, friends and family, 2018 was our 4th grape harvest. The traditional champagne varieties: Pinot Noir, Pinot Meunier and Chardonnay were planted in 2012, some vines are not yet mature.  Grape quantity was significantly up versus 2017 especially the Pinot Noir.  Each year the local conditions throw us new challenges this year heat and near drought conditions during the grape development period.  The fruit has delivered sugar and acid levels well within the required range to make great English Sparkling wine ready for 2021!

The buds on the vines began to swell at the usual time starting in May.  This year we didn’t suffer from Spring frosts so development was uniform across each variety. June was much drier than average.  Both June and July 2018 saw daytime temperatures well above average, with 24% more sunshine hours than the average of 1981-2010 according to the Met Office. We missed the little rain that fell on North Notts and South Leics meaning the vines began to show signs of draught stress.  This was very evident in the small size of the Chardonnay berries and the early yellowing of their leaves in August. By early October the grape sugar levels were as high as the 2017 harvest so we picked, finishing on

Not all our vines are mature so we have yet to meet our yield objectives.  Average bunches per vine, bunch size and grape size increased year on year, with the exception of the Chardonnay grape size which was significantly reduced.

The Pinot Noir yields were the best with the lower south westerly corner of the vineyard so heavily laden that the pickers ground virtually to a halt!

The harvest took place from 4th to 10th October with a day off for a wet Saturday (7th), the total yield was twice that of 2017.

Instead of bird netting we used white hay bale netting to protect the Pinot Noir from starlings, we began to see the flocks in September including during the last tour on 22nd September, just after I’d talked about the impending threat!  Again the netting was an excellent deterrent although we also deployed our army of scarecrows just to be sure.

2018 was a great year, a big increase in quantity, great sugar and acid levels.  The harvest was completed in 6 days of picking assisted by fabulous volunteers and all of Hanwell’s team too.  We hope for a warm summer in 2019, but won’t hold our breath!  Until next season …

What are you looking for?

You have Successfully Subscribed!

We use cookies to ensure that we give you the best experience on our website. If you continue to use this site we will assume that you are happy with it.OkPrivacy policy